My neck pain “came out of nowhere” fifteen years ago.

Like some silent ninja warrior, it shadow-stepped its way past my defenses.

But unlike a supreme master of stealth, it never seemed to vanish — like I’d hoped it would — in a hazy puff of smoke.

While it would throw an irritating monkey wrench into my sleeping habits, collegiate studies, and martial arts training, it wasn’t until I became a professional Desk Jockey that my neck issues became downright obnoxious.

Eight years of first-level service support for an IT department brought with it a suite of mental frustration, emotional turmoil and physical degeneration.

Some days were bearable, some days were worse, and some found me unable to lift my head off the pillow without excruciating pain snapping me back down to my sad bed-ridden reality. 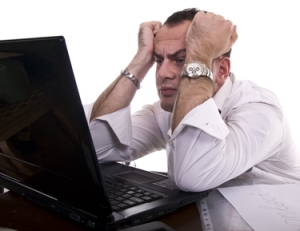 Myself and the other folks on my service team fondly began referring to ourselves as Chair Bears on account of our slumped over postures, and the rather grizzly outlooks that eight hours of mind-boggling phone support and organizational politics bestowed upon us.

Tension headaches, shoulder pain, back pain, neck pain, carpal tunnel syndrome and eye strain were not only daily complaints, but reasons for frequent use of sick time. Unfortunately, we found ourselves unable to shed the Chair Bear moniker even after leaving the cubicle for the evening, and the patience and understanding required of the job was on low reserve for our loved ones back at home.

Neck Pain Isn’t Always A Neck Problem
I would constantly stretch, crack and exercise my neck in hopes of finding some relief.

I went for massages, imaging and therapy.

Sometimes I’d get relief, but more often than not it was fleeting — a momentary glimpse of salvation. And often times, the work on my neck caused more pain and discomfort than I felt prior to the treatment. 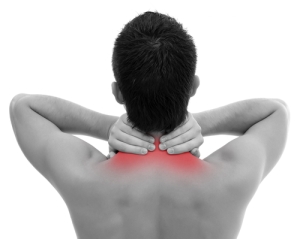 It seemed all that work on my neck never really got to the root of the problem.

To say that I was frustrated would be an understatement.

Looking back on it now though, it makes a little more sense…

My neck issues weren’t a result of direct trauma or an auto-immune disease, but instead were more functional in nature. My past experiences and lifestyle choices had created the present situation, and my daily habits were evolving it along its painful path.

It was evident that the stress inherent in Desk Jockeying played a large role in the manifestation (and exacerbation) of my physical pain. But I had to pay the bills, so leaving the job at that time was not a conceivable reality.

I needed to find a positive means of managing the incoming stress and mitigating the already existing discomfort.

And I soon learned that a good deal of my neck pain could be alleviated by working on areas outside of the neck — specifically the region surrounding the shoulder girdle.

You see, the body is an intricate, interwoven mass of connections, and a change in the state of one localized area has consequences system-wide. This goes for all of the processes of the mind as well as the body.

This made a lot of sense to me.

The fact that much of the work done directly on my neck resulted in a negative feedback reaction didn’t mean all hope was lost, even though I felt that way for a very long time.

It seemed as though my shoulders were going to be the shadows through which I’d sneak up on my neck pain.

Working Under The Radar Of Neck Pain
In the following video instalment we’re going to look at a movement sequence I like to explore with my martial arts and combatives group as part of scenario-specific training.

All this talk about ninjas, it seemed only fitting 😉

While we typically explore these movements standing up during class, they became a seated staple of my stress management program at work, helping to alleviate neck, shoulder and back tension while improving my breathing and overall sense of well-being. 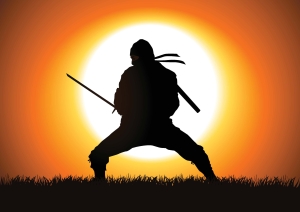 In my mind, I was killing two birds with one stone. I was managing work-related stress (and my neck pain) while getting some martial arts training in at the same time.

This made a previously mundane task a lot more fun. From a cognitive and visualization standpoint this was huge. Metaphorically, I was a ninja combatting the Chair Bear and his claw of job-related stress through my seated movements.

At first, the guys on my support team thought I was nuts, and it was good for a few laughs. But their razzing eventually changed to curiosity, and we “shadow boxed” job stress every hour on the hour.

A Few Things To Keep In Mind
Neck Pain Up In Smoke
Well, it isn’t quite gone. But it’s getting there with the help of some stealth ninja tactics 😉

The stress of the job didn’t totally go away either, but how I handled it emotionally, mentally and physically changed.

I’m still excavating. Still digging and turning up old relics that inform and advise my current state of affairs. I’m reminded every day that my neck issues didn’t just come out of nowhere, but instead were (and still are) a work in progress.

So go on and explore the movement sequence, play ninja for a bit, combat the Chair Bear, and let us know how you make out.

John Belkewitch is a Somatic Fitness Coach and Martial Artist from New Jersey. He’s the owner of Day 1 Fitness Solutions, and helps folks who are tired of beating their bodies into shape find more creative and mindful movement practices.