Bodyweight exercise has been used by martial artists for centuries to build attributes like strength and endurance. All traditional martial arts include specific conditioning methods, and in many cases these methods are considered so valuable that they are highly guarded secrets of the lineage. My own background of Bujinkan Budo Taijutsu included the study of Shinden Fudo Ryu Dakentaijutsu, which used the natural surroundings of the forest as implements to condition the body.

The effectiveness of these traditional bodyweight exercises is proven, but in my opinion the ancient masters didn’t take them far enough. Modern sport science can improve upon traditional methods so that they entrain specific skills in addition to building attributes. We’ll begin this series by looking at an obvious example: upper body force transfer.

Your goal is to connect your entire body to the extremity that’s delivering the force, forming a chain which slings force from your hips, up through your torso and out your arm, while remaining firmly rooted to the ground through your legs. If any one element of this chain is broken, you’ll experience a leakage of force.

An example of force leakage is the arm puncher. He flails ineffectively with his arms alone because his transfer system is interrupted at the shoulder. The same can be said of the grappler who tugs and jostles with his arms and shoulders, attempting to muscle the opponent rather than apply proper technique.

The traditional martial art approach to fixing this problem would involve more technique practice. In my experience, this is a hit or miss solution (apologies for the pun). Some students will get it immediately and will change their technique, but many others will never get it and will simply fade away.

The Forbidden Fitness approach involves pulling out the missing component of the desired movement and creating an exercise to re-incorporate that missing link in the chain, rewiring the student’s movement ability while at the same time building attributes. We then check our results by testing the student’s punching power on the mats.

Let’s look at a practical example of this in action. We’ll stick with our example of the arm puncher. In his case, we first want to address the break in force linkage between his shoulder and the rest of his body. He may have additional issues, but we’ll focus here first for the sake of example.

In assessing a student’s movement, we’ve decided that the Screwing Arm PressUp is the exercise we’ll use to rewire his movement patterns. This exercise will teach him to spiral force outward through his arm, locking it in at the moment of impact by packing his shoulder joint to transfer the resultant force to his entire structure. That’s what happens in terms of mechanics. By doing the exercise for reps he will also increase his upper body strength and endurance, which will add bodily force to his improved technical efficiency.

Here’s a breakdown of the exercise: 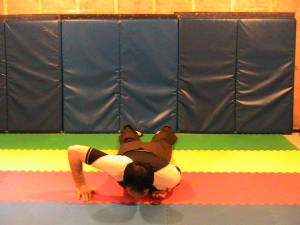 1) Begin by lying on your stomach with your left arm bent beneath you (weight on the back of the forearm and palm up), and your right propped up on your palm in pushup position.

2) As you roll your body towards the right, rotate your left arm to screw it over palm down and bring yourself to the top position.

The screwing motion of the arm happens simultaneously with the press that raises you up. You should ascend on an angle rather than simply roll over and press straight up. When your arm reaches full extension, your shoulder joint should be in a closed-packed position.

The lowering and unscrewing motions happen simultaneously rather than step by step. Repeat to bring yourself back to the other side for one complete repetition.

Please try this simple exercise for yourself. Once you’ve mastered the mechanics, add it into your conditioning regime for a training cycle and let us know how it builds your abilities on the mats.

In the second instalment of this series on bodyweight exercise for martial arts, we’ll look at a cool variation on the Screwing Arm PressUp which builds the tensile strength of the wrist.

You can find an entire series of such exercises in my Forbidden Fitness program. Check it out.